The Imam Ali Moske in Copenhagen is the biggest mosque in Denmark. It was inaugurated in October 2015 and is placed in the district of Nørrebro. Two turquoise minarets and a dome decorated in gold look over the square apartment blocks surrounding it on Vibevej. The blue of the facade stands out, in contrast to the red bricks of its surrounding architecture. Somehow, this majestic blue building appears hidden on a side street to Nørrebrogade, and I do not even register it until I literally stand in front of it. 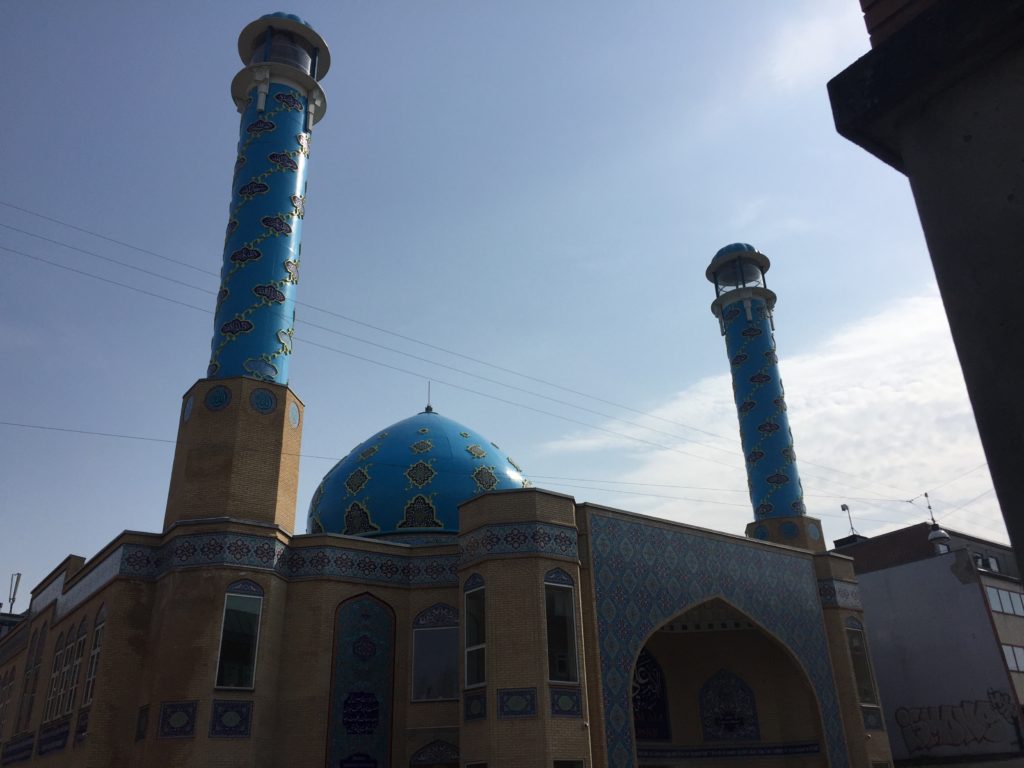 As a part of its services, the mosque provides guided tours. Visitors usually consist of school children and tourists, but, as we can read on their Facebook profile: “Everyone is welcome, regardless of gender, race, ethnic origin, religion, faith, handicap, age or sexual orientation.”

That is how I visited The Imam Ali Moske for the first time – with a group of students from Cultural Encounters. Our guide was an articulate, young man, smiling widely while showing us around. We were introduced to the history of the mosque and its community and, considering that there was only one Muslim person in our group, got a crash course in basics of Islam. Our tour around was pleasant and felt almost homely – walking around barefoot certainly contributed to that feeling.

I have been to a mosque before, but that is not why I felt comfortable there. I recognize the pattern of the mosque. I recognize the feeling it arises in my chest and stomach. I feel the same way in a church. Raised catholic in Poland I went to church every Sunday. I was required to dress “properly”, recite prayers during the mass, and be able to remember when to sit down and when to kneel. The routine of a mosque is similar, even the sound of a room full of people is similar.

At the end of our tour, we were told that we were sitting on the biggest carpet in Europe. The brief Q&A led to questions about the women’s position in Imam Ali Moske, and from there the discussion quickly turned to sexuality. Usual issues were raised. The conversation was polite and respectful, but I ended up leaving the mosque feeling uneasy.

I believe my experience being raised catholic and the embodied performance within houses of worship affect the way I think of that conversation. I know how I would feel if we had been in a catholic church. I would consider it futile. In that context anyway. A young man representing the mosque is welcoming us in his house of worship, and we spend part of the afternoon questioning his moral code, his religion, his community. I am not sure if that was a first impression we wished for and I hope he did not leave that meeting feeling judged. That is certainly not what we intended to do sitting on the biggest carpet in Europe.