Two enormous minarets rise above the roofs of Nordvest. We were about to attend the Friday prayer at the Imam Ali Mosque. While entering the mosque we were confronted with the gender division, which would split up the group. We realized that the division might foster different experiences of the prayer.

Entering the balcony, people were already sitting on the floor or on the wooden chairs placed right next to the railing. Not knowing where to sit and not wanting to make too much disturbance, moving along the walls felt like the best thing to do.

Choosing to sit at the very end of the room gave no invisibility. We were the object of many gazes. Some with welcoming smiles, some with curiosity or even wonderings.

Many chatted together during the prayer and kissed three times on the cheeks to welcome one another. It felt like a small community. Even though the whisper from women socializing was always audible, one felt very aware (of oneself) and cautious towards speaking.

With Arabic words filling the room, a feeling of mystery was produced. We couldn’t see the person speaking these compelling words. From the balcony, one could only stare at the big chandelier in front of us and the people in prayer.

Suddenly came a deep collective sound from below. The balcony kept quiet. Everyone rose and a synchronic act began. The prayer. No guidance was given. Not being religious, it felt wrong to perform the prayer, but impolite not to follow the synchronic act.

A person kneels in front of us and, while laughing gently, asks if we understand the words of the imam. The answer was no. Another person approaches and friendly elaborates the many questions that had lined up during this attendance. The contact zone became a safe zone. 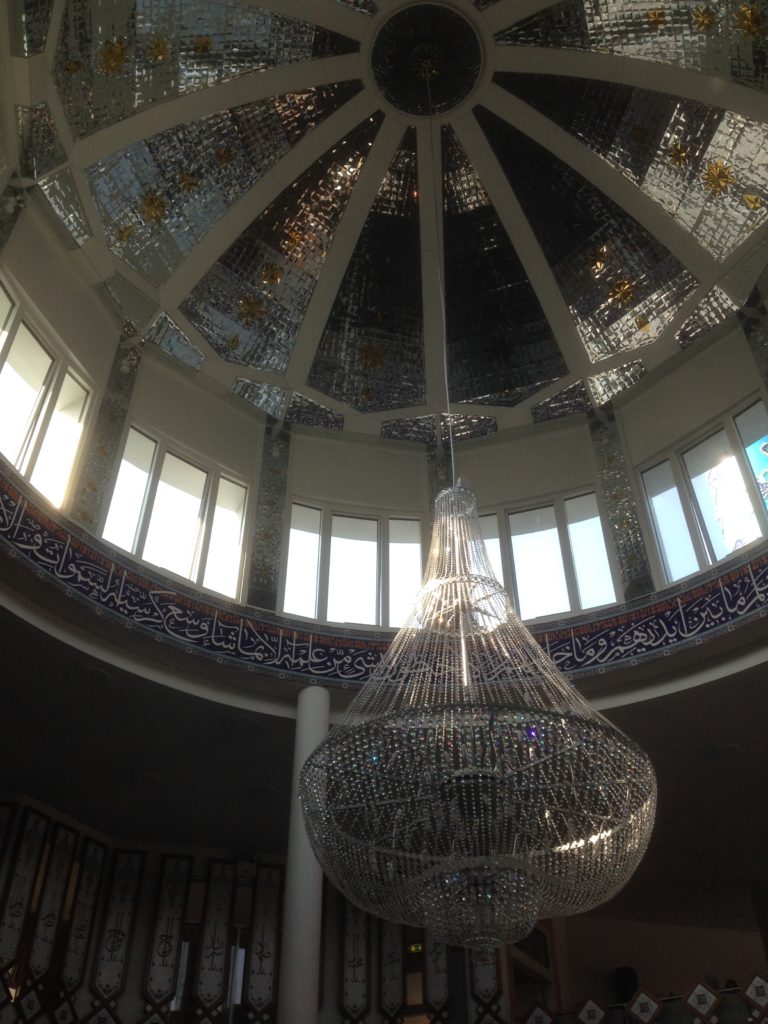 After entering the mosque, two persons asked about the purpose of my visit, offered to assist, and showed where to put bags and jackets.

The room was big, beautifully decorated, with a big crystal chandelier in the middle. The carpet felt nice to sit on at first. Subsequently, the hard looking chairs some of the elderly sat on were looking like something sent from God.

Occasionally everybody said something as a response to what the Imam said.

When people entered the room, they greeted each other with 1-4 kisses on the cheeks. Though not knowing anyone, people still came over and said hello. It gave a very warm feeling.

It was hard to focus on the Imam. He spoke Arabic. A translation of his words was shown on a big flat screen TV mounted on the wall, but far away, which made it difficult to see.

At the end of the prayer, a man began to say something loud in Arabic. People started to move around, lining up in rows. Imagine being in a room, where everyone but you knows what to do. I felt uncomfortable. To make sure nobody would feel disrespected by the lack of knowledge about the prayer ritual, leaving the room felt like the best thing to do. The same person that had showed where to put my things came over and showed where to stand, without annoying anyone, during the ritual. A few moments later, he came back with a piece of chocolate.

What shows from our experiences is that while the gender division we encountered did in fact not produce significantly different experiences, it might demonstrate the problem of our expectations towards what role gender plays within Islam.