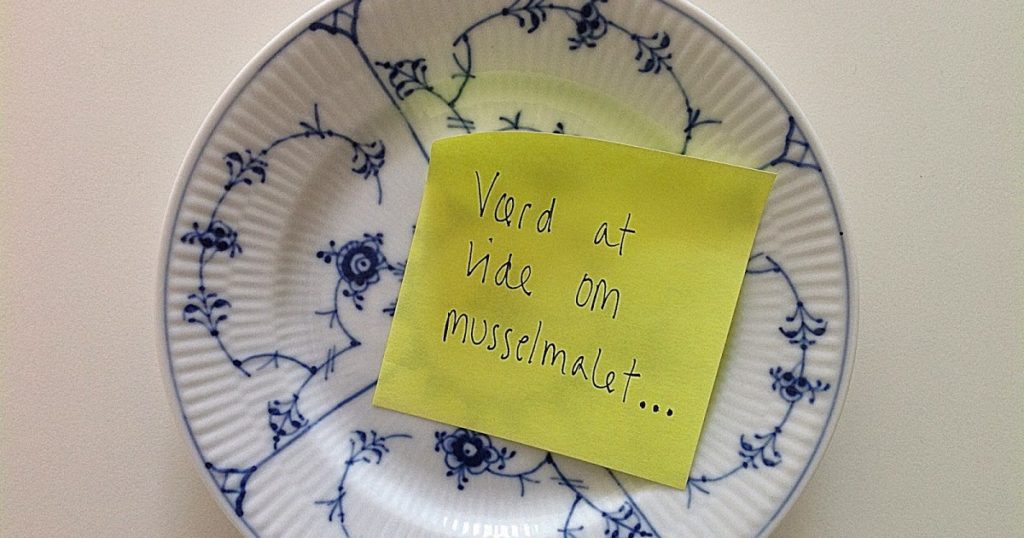 Here is a quick question for you. Where did our favourite Danish porcelain really come from? – not really in the sense of ‘made in Hong Kong’, kind of, from where are items manufactured, sort of questioning. But more to the question of, where did the method of production come from? Who invented the goat – really?

In this blog, I have chosen to bring focus to one of Danish society’s best known design objects. The ‘Blue Fluted Pattern’ (in Danish: MUSSELMALET) porcelain from the well-established Danish Royal Porcelain Factory.

Today, porcelain may seem like a regular product, however, a quick dust-off, of the old history book, brings more information to the clue.

The manufacture of porcelain, has, as the title implies, its origin from China. From around the year 900 A.D., and actually many centuries forward, the production was kept primarily as a Chinese craft, and the techniques, surrounding burning heat and mixture of components, was kept secret from the rest of the world. Not until the Portuguese created a trade route that would be known as the ‘Silk Road‘ and brought examples of the impressive Chinese craftsmanship, would it be introduced to the finer European dinner tables. First in the year 1708, a European was able to produce porcelain of a quality like the one from China. From here on after, the technique was, more or less, copied all over Europe, also, into the production at the Danish Royal Porcelain Factory at the opening in 1775 (Dickson 2006, 42).

Also concerning the design, some of the inspiration came from the ‘far east’. The ‘Blue Fluted Pattern’ has been re-designed several times. But it was first introduced by the Danish architect Arnold Krog in 1885. Krog took inspiration from i.e. Japanese pattern techniques and arranged it in connection with Danish nature (Dickson 2006, 42).

In more recent times, the popular porcelain has made its way into the more mundane parts of Danish society, still portrayed, as one of the most Danish of Danish designs. Almost as a trademark logo. But how that Danish has come about, and how that story is told, is not always one of the same.

So to answers the rather weird and silly question of, ‘who invented the goat?’, or in this case, the ‘Blue Fluted Pattern’ porcelain, is perhaps, not so obvious a question, after all.

Right of the blog, it might seem logical, just to flip the plate, and check for answers. But the overall project of this blogpost is not to take anything for granted, and perhaps questions, how we formulate, what is ours by design, craft, and originality.

Especially in a time of immense focus on immigration politics and cultural identification issues all around in Danish society. It seems relevant to question, if not rethink, how we think of what we think. Have attention to the traces of a global colonial past. Also, where, we slam the fried pork, boiled potatoes, and white milky sauce with chopped parsley.