In a time where there appears to be an on-going focus on the depolarisation between Muslims and non-Muslims in Western society, it was especially interesting and enlightening to visit the Imam Ali mosque in Nørrebro as part of our Cultural Encounter’s course. When arriving to the mosque, the construction appeared massive and almost majestic in its expression with its two, blue, beautifully ornamented minarets and dome, which stood out in comparison to the other buildings on this street. 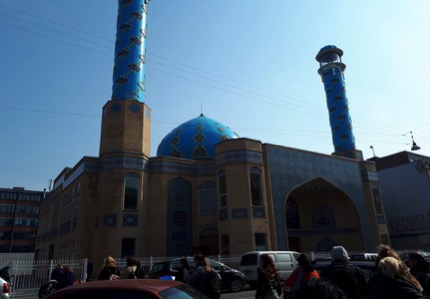 Entering the mosque we stepped on to its beautiful polished marble floors and were greeted by a young man, whose job was to show us around inside of the mosque. He politely asked us to take off our shoes out of respect for the mosque and its members, and suggested that it would be best if the ladies wore a scarf, covering our hair. For the three of us, this was our first visit to a mosque. Although we had seen plenty of them from the outside, we had never been inside one. This made it all the more interesting.

We were then given an introduction to the different prayer rooms in the mosque and as we walked around we were amazed by the pompously decorated carpet inside the main prayer room. The colours and motives were beautifully crafted and we were mesmerized by this marvellous work of art. Also, a magnificent chandelier was hanging down from the ceiling, making the room look almost royal. 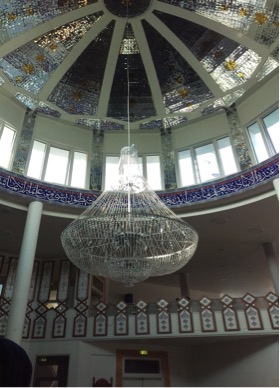 As we were standing in the middle of the room, we could not help but notice how the room was used as a space for both prayer and sacredness, but also socialisation. We noticed some men who were praying, while holding the Koran in their hands. One man was sleeping on the floor, another was on the phone walking around in the room. In the prayer room for women, children were playing and laughing and women were talking. And to add to it, we, a group of students were being given a tour. In our minds, we immediately compared this space, to the space of a Christian church, in that holding some familiarity to all of us. However, due to the construction of the mosque and the division of prayer rooms (some of which where on different ground levels), the experience of going through these religious spaces was somehow different. Besides the main prayer room, which was also the largest, the other rooms gave a more informal and almost domestic feeling compared to how the main space of a Protestant church would feel like.

Drawing on Martin Radermacher’s text on ‘Space, Religion and Bodies’, we have also come to think about how these two spaces of religion, sacredness and meditation differentiate from one another? Due to the construction of this mosque it was clear that each room was used differently, and while most of them were prayer rooms, some were also used for conferences and teachings.

Towards the end of our tour, our guide told us that the mosque offered many activities for young Muslims, and that by offering different activities and giving students, like ourselves, tours around the mosque, they hoped to combat the ‘us’ versus ‘them’ dichotomy. In this way the mosque also aspires to be used as a domain for engaging in different social and cultural encounters by inviting the public and breaking down the fear towards Muslims – a message that was important for them to get across.